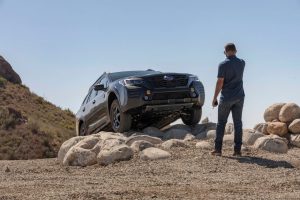 Firstly, Subaru, the brand, is creating a crossover wagon spin-off. It’s just that the vehicles are too popular to be kept aside under the Subaru banner alone. Why wouldn’t they or couldn’t they be happy with something more adventurous? Enter the Wilderness. The Outback is the first model from Wilderness and it’s intended to be amazing. At least, that’s what engineer/product planner/spokesperson for Subaru says. His name is Tim Wood. “For our performance cars we have STI as a halo brand, it’s a sub-brand, and we really wanted to have something like that for our SUVs and crossovers, and that’s where this Wilderness brand came from.”

Granted, the STI is supposedly a WRX built to perform best on rough surfaces. But with Wilderness, the Outback is really looking towards becoming more of a sub-brand that can withstand growth like you’ve never known. The Outback happens to be a well-to-do car that can handle adventures outside of the city. That would really be a stunning adventure, wouldn’t it? Adventuring outside of your comfort zone? As per usual, Subaru thought of everything. The Wilderness vehicles will likely be the start of a whole new beginning for Subaru. And who wouldn’t be able to tell?! The Outback WIlderness has almost an inch of ground clearance unlike anything anyone else has ever seen. The increase in ride height brings all sorts of new angles to the game.

The Subaru off-shoot has tough tires.

For example, they are Yokohama Geolander 225/65R-17s. They stay put together for longer amounts of time while also providing a spare tire in the back instead of a donut found on so many vehicles as of recent. Finally, the Wilderness also allows for a front skid plate as well as a 180-degree”Front View Monitor.” On top of this, there will be roof rails that can sustain as much as 700 pounds of weight. And that’s just static.