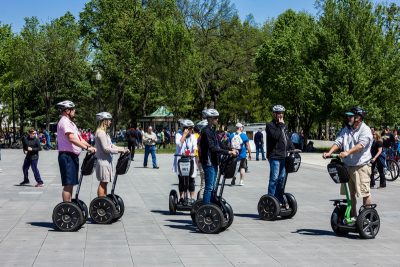 The Segway was supposed to present “transportation for the future”. This was almost 20 years ago. Since then cities have outlawed its use and the company has shifted gears away from what it used to be.

The Segway was brought about during the “future boom” of the early 2000s. This was supposed to represent the pinnacle of human engineering in that you didn’t need to walk anymore. I mean, sure, we have bikes, skateboards, rollerblades, and whatnot, but old people couldn’t use them. Old people could, in fact, use a Segway to get around. This was the selling point. If you had arthritis or disability that affected how you would get around, then this was probably the best bet for you. Unfortunately, a lot of people complained about it. Actually, too many people had complaints about it.

Negative Outlook By The Public

Many people I guess didn’t see eye-to-eye on the use of this new and interesting product that was helping people. They thought it was a bother for many to have to deal with people driving motorized scooters on city streets. Unfortunately for them, in 2020 most major cities have adopted a crazy scooter program that is supposed to be totally way better...but isn’t.

It Was Supposed to Be “Untippable”

I remember taking a Segway tour down in North Carolina. Things were going pretty well during the first leg. I was with my family. My mom, dad, and sister were all visiting family when we decided to take the tour. This was back when the Segway had first come out and it was booming for tourists. I distinctly remember driving (or wheeling? ) around for a little bit to get the hang of it. Next thing I know there’s a young couple walking past me going “Hey Do those things tip?” to which I smugly (that means with my nose firmly up) responded with “Nope”. I then immediately drove right into the stub of what once was a parking meter and flipped the whole thing.

My dad thought I was messing around, the Segway guide wasn’t thrilled either, but hey, I was 13 and this wasn’t supposed to tip over. The fault comes from Segway ’cause they’re liars.

Over time, overcrowded city streets didn’t adhere well to the Segway. It was simply too big and bulky and having to maneuver around people all the time was a hassle. Where disappointment would start to loom over the company, they made a lateral movement. If they were going to be too big and bulky, just make smaller transportation assisting devices.

What Is Segway Doing Now?

The company has since moved into other transportation areas. Utilizing the same gyroscopic methods as the OG device, they have created some pretty cool stuff. Like a motorized one-wheeled skateboard and a weird variant that you can simply stand on like a rollerskate. I’m not sure, but apparently it’s kept them afloat all these years so they must be doing something right.

WTI: Massive Sell-Off And What It Means