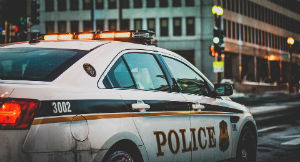 The Portland Police Bureau reported that the man brandished a knife. Furthermore, he suggested he had an explosive device. Then, police officers shot and killed him.

Police officials responded to a call from a building around 10 a.m. on Sunday. Initially, they responded to reports of a man with a knife causing a disturbance.

Then. the police arrived. Officers went into a stairwell. There, they encountered a man and a woman. Officials say that the woman appeared to be injured.

Police officers attempted to speak with the man. Apparently, this didn’t work. Then, the officers used less lethal force. Unfortunately, they eventually ended up fatally shooting and killing the man.

Police officers report that the man died at the scene. Furthermore, officials are not releasing the man’s age or identity at this time.

Meanwhile, medical officials transported the woman to an area hospital to treat her for her injuries.

Officials report that no officers were injured during the incident.

Still, officials sent the bureau’s Explosive Disposal Unit to the scene based on the threat the man made about an explosive device. However, this unit did not find any explosives at the scene.

Witness Mike Connors is a lawyer who works in the building. He claims that he heard two people arguing in a stairwell. Then, he called 911. Furthermore, he yelled into the stairwell that he had made the call.