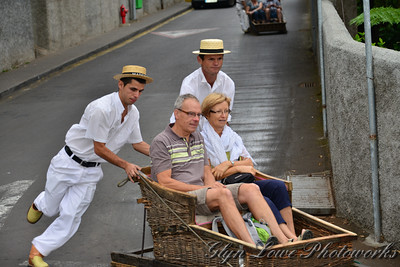 The Monte Toboggan is a special method of transportation stemming from Medeira, Portugal. Developed in the 1850s, the toboggan utilized a tradition wicker chair that allows users to slide down the steep capitol hills with ease.

In a time before cars, many would have to walk down the steep incline of Medeira’s hills. The average time just to get down the hill was approximately 30 minutes. This led to the development of new methods. Thus, The Toboggan was created using wicker bindings and two wood tracks that are greased up to slide down the streets. It is steered by two men who navigate the terrain.

In its hey-day, the toboggan would transport upwards of 200-300 people a day. It was a primary source for citizens to get to work in the capital city below. The narrow roads and steep hills made it near impossible for trolly cars or other forms of transportation to develop, so the people needed to find a way to get from point A to point B. This drastically helped to increase population traffic for a better part of the city.

In the early years of the 20th century, many vehicles started to populate the streets of Madeira. Many citizens who lived in the area started to own some form of automobile. This meant reliance on the old methods started to take a back seat. The use of the toboggan started to decline. It still maintained its use for other means and became a staple in representing the character and charm of the city.

The sled is a key piece in representing the cultural integrity of the city. While it is a niche way to get around, it acts as a major tourist attraction. Travelers from all over the make the stop to slide and drift down a paved road at 30 miles per hour. Anyone can take the sled, and although it is a crazy ride, it can be a relatively comfortable experience given the circumstances. It is good to remember that these sleds operate on public roads. Nonetheless, the experience is worth it and the two men who steer the sled are professionals.

12 Most Important Steps In Becoming A Truck Driver

Subaru WRX Is Going To Keep The Manual Transmission

6 Most Dangerous Roads and Highways in Portland