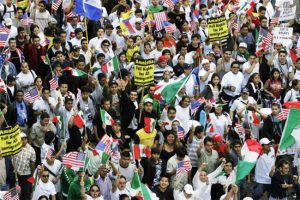 There will be rallies in the parks and marches in the streets of Portland, Oregon. But the biggest event has been permitted by the city. The first rally takes place at noon  outside the Smith Center at PSU with a march at 1 pm for joining  the May Day Coalition at Shemansky Park at 2. Then this larger group will begin to march through downtown at 3. Jamie Partridge, who organizes the protest, says that both marches have permits.

According to the Portland Police, they do not have any information showing there will be a major disruption which is needed a large police response.

If today’s protest get out of control, Police will be there, but so will fire fighters. Everyone knows that Portland Police has special gear for these types of events.

Rich Chatman with Portland Fire says on their helmet, face shield, and tactical vest you will see a red cross. Which is the universal symbol for first aid. They will also be carrying with them basic medical supplies along with some of the latest technology.  Chatman says firefighters performing their duties during today’s protests have trained along side Portland Police to prepare for protests in the city.

Thousand of protesters are expected hit the streets of downtown Portland for may day, and there will be traffic problems.  Last year’s May Day went off without a hitch, but there’s no idea what will happen this year.

May Day is an International Worker’s Day, which is calling attention to worker’s rights.