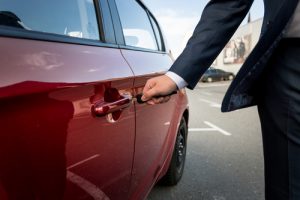 The wife of Matt Barbee, a Tigard police officer, told her husband still needs 24/7 care after a car crash in December left him with a traumatic brain injury.

Sherrie Barbee said her husband is now in outpatient therapy and can’t stand long because of pain issues.

Police said Barbee was off-duty in his personal vehicle when he pulled off Highway 26 in Hillsboro with car trouble. They said a driver hit him while he was waiting for help and that the case is still under investigation.

A new expansion of Oregon’s “move over” law took effect in January. The goal is to prevent like that.

“It’s a very rewarding job to be able to help people when they need it,” Ron Duncan, the vice president of operations for B.C. Towing in Salem told.

He’s worked in the business for 25 years, much of that time as a driver.

“I’ve been hit by a car twice. Fortunately, they just grazed me,” Duncan said. “I’ve talked to other tow operators that have actually been in some serious accidents.”

If drivers saw one of those vehicles on the side of the road, they had to move over a lane or slow down at least 5 miles per hour below the speed limit.

Duncan said he sees drivers disobeying the law on “almost 99 percent of the calls.”

At the beginning of the year, the “move over” law was expanded, requiring drivers to move over or slow down for any vehicle displaying hazard lights or other signs of distress.

Since then Duncan said he’s seen “absolutely no change.”

A fundraiser to help pay for Officer Barbee’s medical care will be held at the Vernonia School Commons in Vernonia from 5 p.m. to 8 p.m. on March 3.

“Our medical bills are huge and racking up daily,” Sherrie Barbee explained via a Facebook message, saying she’s providing care while raising three kids and working from home. “Unfortunately, this accident WILL end up causing us great financial harm. There is a deep concern as to whether Matt will be able to work again in the capacity he did previously.”

Sherrie added that Matt “took all safety measures including putting construction cones around his car” as he was waiting for help.

A GoFundMe page has been set up where you can donate money to help with Matt Barbee’s medical expenses.

Tesla Has Compensated With EV Registrations In The United States