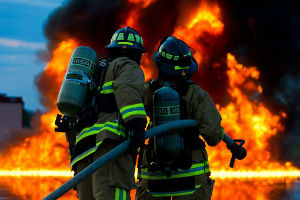 CLACKAMAS, OR – A Franz Bakery delivery truck driver died Monday after purposely driving his truck directly into a propane tank. The incident took place at the company’s Clackamas distribution center.

According to Company Chief Executive Officer, Bob Albers, other employees at the depot near Southeast Carpenter Drive and Capps Road witnessed the male worker seemingly speed up and into the propane tank located just outside the property.

The collision into the propane tank set off one explosion and produced a two-alarm fire that burned up the driver’s delivery truck, and two other cars parked nearby. The blaze also damaged a nearby building. According to Brandon Paxton, a Clackamas Fire District 1 spokesman, the fire was called in around 2:35 p.m.

Fortunately, nobody else was harmed in the tragic and troubling incident. This fact was confirmed by Sargent Marcus Mendoza, a Clackamas County Sheriff’s Office spokesperson.

The victim’s supervisor told detectives that the man was suffering from some mental illness issues and was having problems within his family. Undoubtedly, these problems seemed to be a factor in his death.

Surveillance video captured at the scene seems to reinforce eyewitness reports of how the crash unfolded.

As of yet, the man’s identity has not been revealed by authorities. They will do so once his next-of-kin have been notified.