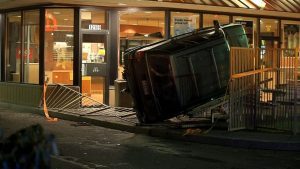 A McDonald’s Restaurant in Oregon became the scene of a hit-and-run early Thursday morning.

Officers with the Oregon Police Department responded to the McDonald’s located at 12109 Northeast Glisan Street around 1:30 a.m. where a Jeep had driven right into the Restaurant.

The vehicle crashed through fencing that wraps around the restaurant and broke a few of windows before ending up flipped on its side.

Damage was also present on the fence and bushes between the restaurant and the adult entertainment business next door.

The driver left the scene on foot but that the current location and status of the driver is unknown.

The restaurant itself was not open at the time but the drive-thru was open. It is not known if any employees suffered any injuries.