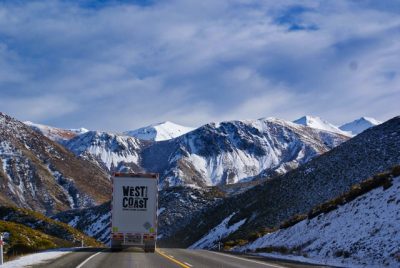 Forty-five semi-trucks flipped over on their sides after strong gusts in Utah hit them on the highways.

Let’s say you’re on the road for hours. You’ve got little sleep, precious cargo and a heater that just doesn’t work, no matter how much dust you clear. Those details alone make driving tons of weight tons of miles a ton more stressful, if not less desirable.

Finally, nobody needs an accident to happen on such short notice.. Unfortunately, that’s the type of thing that just happened with forty-five semi-trucks.

Strong winds over the past couple of days have reached seventy-seven miles per hour as close as Salt Lake City International Airport. Resulting in the cruel joke of God cow-tipping semi-trucks at full force.

As a result, the Utah Highway Patrol and Rocky Mountain Power Crews alike have been doing their part to clear the roads. Sometimes one to two hours, depending on the damages of all the semi-trucks.

From a glance, this seems impossible to avoid. However, there’s a method to the madness. Here are some quick tips to avoid quicker flips.

As a trucker, you need to ask questions about the route you’re destined to travel. Check the weather report. Find out the elevation progression. Respond to a casting call for Ice Road Truckers. If you don’t prepare for the worst that’s to come, then how can you celebrate the best that’s already here. An hour delay may prolong the possibilities of death. Just ask your boss.

Pack Some Mustard On That Hot Dog

It makes sense that winds would need to be very powerful to take down some semi-trucks. If that’s the case, proceed to load up as much as you can whenever leaving dispatch. After all, you are doing the Lord’s work. Why let nature change your human nature? Go for the gold and, responsibly, be on your way with the goods in a safe manner that will allow for no tragedy. It’s only safest.

Certainly, driving your semi-trucks from place to place isn’t too different from jogging. You pace yourself, decide where to run and where to walk, yet still feel exhausted at the end of the day. So, is there a rule against taking your sweet, precious time to cross that bridge, when you get there, if you get there? Maybe be wary of the speed limit and try to set your own rules, especially when you as a trucker are technically the proverbial “king of the jungle.”