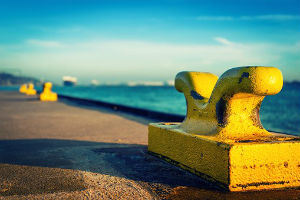 As the most booming time of the shipping season arrives, an increasing number of shipping containers arrive at ports. Currently, we’re seeing how the North American marine terminals handle the extra truck traffic. Last year the experience throughout the ports had many truck drivers waiting in long backed up lines and ultimately shippers faced delays in grabbing their freight.

This issue of long wait times for drivers was noticeably bad at the largest U.S. port operation, Los Angeles and Long Beach. At this location the waiting period for drivers hovered around the 90 minute mark or higher in the fourth quarter through February 2019. This information comes from the Harbor Trucking Association’s Truck Mobility Data powered by GeoStamp. As a reaction to these delayed pickup times, drivers would show up earlier at off-peak hours to grab containers. This approach, however, even created longer lines.

In order to lessen the queues, the Los Angeles-Long Beach marine terminals revised their appointment schedule so that drivers could pick up both during the day and at night. This newly implemented system, called PierPass 2.0 appeared in November 2018. Now, up and running, the system, according to administrators offers plenty of capacity for drivers.

In fact, PierPass says that over a third of the available appointments for gathering shipments from the port have gone unclaimed. Consequently, that means cargo owners have plenty available times to pick up their containers.

For the available daytime slots, PierPass says that of the area’s 12 marine terminals, 64 percent of appointments were taken, while the remaining 36 percent went unused. Furthermore, evening shifts show plenty of capacity with around 45 percent of the potential appointments not being used.

John Cushing, president of PierPass, said “that the system has substantial capacity to handle additional growth and offers significant flexibility in appointment times.”

What do you all think? Can I system like this be a benefit at another port?