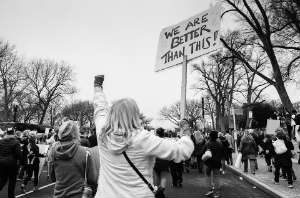 Portland, OR – As hundreds of people are still in the streets in protest against police brutality, supporters are clashing on both sides. This has left numerous properties with severe damage and costing lives.

On Saturday night, a large gathering of Trump supporters approached the scene of protesters with paintball guns and bear mace. The class is resulting in 1 dead.

The current name of the individual is unknown but they were a member of the Patriot Prayer – a far right group of individuals who have been continuously clashing with protesters since the start of the event.

“I heard like three seconds of yelling and saw a guy spray bear mace,” Justin Dunlap a journalist told CNN. “The victim sprayed mace and launched it right into the other guy.”

“Ted Wheeler, the wacky Radical Left Do Nothing Democrat Mayor of Portland, who has watched great death and destruction of his city during his tenure, thinks this lawless situation should go on forever. Wrong! Portland will never recover with a fool for a Mayor….,”

Ted Wheeler had others things to say about that:

“It’s you who have created the hate and the division,” Wheeler said.”The tragedy of last night cannot be repeated,” Wheeler said. “It doesn’t matter who you are or what your politics are — we have to all stop the violence.”

For many, these clashes aren’t new. As protests continue across America for police reform, tensions continue to rise. Regardless of which side of the fence that some may be, the truly important factor is still peace.

As the country continues to venture closer and closer into dismay, the foundation still stands with those looking to live a free life during the trials of America.