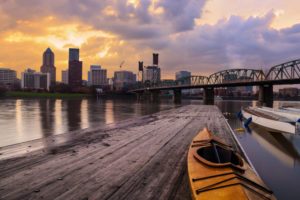 Last week, there was a lot of fuss about Melania Trump’s jacket that was captured in the photo while she was getting on a plane. The Trumps were headed to the U.S.-Mexico border. The jacket had the words “I Really Don’t Care, Do U?” which started up some controversial arguments among people.

People were very upset about the fact that she chose to wear that jacket to send a message out to them. However, President Trump turned to social media and stated that her message was supposed to be aimed towards the media. He stated that the words on her jacket “ Refers to the Fake News Media.” And that “[she] has learned how dishonest they are, and she truly no longer cares!”

Regardless of what he said, people still believed it was aimed towards the immigrant families facing deportation and separation at the border.

So, a clothing company called Wildfang that is based in Portland decided to do something about this.

The Portland-based brand recreated her jacket but with different words in the back. It says, “I Really Care, Don’t U?”

They did this for a good cause. The jacket is being sold as a nonprofit to help immigrant families. They have already raised about $250,000.

They posted a photo of the jacket worn by a model on social media with the caption “Sooo what if we made our own version of Melania’s jacket and donated all the proceeds to @raicestexas, WHO’S IN?”

This brought a lot of attention to the brand and people were very supportive. First, Portland residents were talking all about it until it reached other parts in the U.S.

Since the company saw that people are supportive, they went with the idea and put the jacket up for sale.

They posted on social media again letting people know that the jackets are up for sale.

They created jackets and shirts with their version of the message printed on.

All of the earnings went to the nonprofit organization RAICES, The Refugee and Immigrant Center for Education and Legal Services.

Their goal is to put an end to the separation of immigrant families at the border.

As of today, they are close to $300,000 and hope to keep raising more by continuing to sell these jackets.