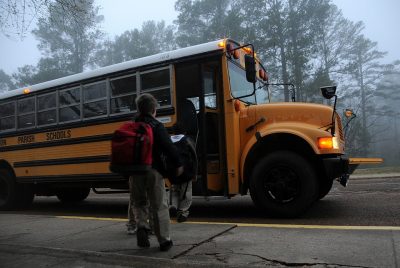 LONGVIEW, Wash. — A young student called 911 to inform that the driver of his school bus was notably drunk.

The boy was riding the Longview Public School bus when he noticed the driver was acting funny. After he arrived home, the child told his mother he thought the driver was drunk and she told him to call 911. The kid’s mother does not speak any English.

“She was drunk. Like, passed three red lights and got on the side road by the 76 and there’s still kids on there,” the young kid mentioned to the dispatcher.

After the dispatcher asked him how he could tell the driver was drunk, the boy pointed out he figured it out by the alcohol odor in her breath and her “wobbly” eyes.

When the 911 dispatcher asked the student if the situation was common, he answered without hesitation.

Presumably, the driver also cussed at the passengers. As the kid noted, the driver usually was very strict about the behavior students demonstrated while on the bus. But, that day, she let them sit wherever they wanted.

“I asked everybody right off the bat and I was like, is that normal for her? And they were like, ‘yeah, it’s Catherine,'” the boy told 911. “I’d rather err on the side of caution, but everyone has always told me: that’s Catherine, that’s the way she acts.”

The bus driver was later identified as Catherine Maccarone, 48. She was detained that very same day and charged with two counts of reckless endangerment. Besides, she is being prosecuted for driving under the influence. That day she had transported first high school students and then grade-schoolers, making together more than 90 passengers.

By the time she was pulled over on Nichols Boulevard, no children remained inside the bus. But police officers immediately noted the obvious alcohol smell coming from Maccarone. Therefore she was taken to the Cowlitz County Jail.

Despite the incident, the school district’s transportation manager mentioned to the authorities that he had met with Maccarone and she seemed normal that morning. Although he did mention he had noticed her “jerky movements” on other occasions.

Longview Public Schools Superintendent described the incident as an isolated event and went on to apologize to all the parents and the school community. “We’re taking it very seriously and doing everything we can to assure it does not happen,” he said.

Drivers must undergo an extensive background check and pass drug and alcohol tests. Besides, they must have a good driving record. Since these measures failed to detect the problem, the school district has already introduced changes in the procedures to assure children’s future safety.